Claudia Joy has been married to Brigadier General Micheal Holden for the past twenty years. They met while studying at Harvad University. The family lives at Fort Marshall in South Carolina. They have two daughters, Amanda Joy and Emmalin Jane Holden. Amanda was killed in a bombing that took place at the Hump Bar in the finale of the first season. In Season 2, Claudia Joy and Emmalin remain at Fort Marshall while Michael accepts a NATO post in Brussels. In Season 3, her husband is promoted to Major General and returns to Fort Marshall.

It is revealed in Season 1 that Claudia Joy abandoned her pursuit of a law degree after marrying Michael. In Season 4 she returned to school to complete her degree and eventually ended up getting a job at a Charleston law firm run by her former law professor, Grant Chandler (Harry Hamlin ). In Season 5, it is revealed that Claudia Joy has an ovarian cyst but it turns out to be non-cancerous. Claudia Joy quits her job at Grant Chandler's law firm after he reveals that he harbors romantic feelings for her.

Claudia Joy and Michael are the god parents of Joan and Roland Burton's daughter, Sara Elizabeth, plus Denise and Frank Sherwood's daughter Molly.

Sophisticated, strong and smart, Claudia Joy has been the heart of the military goings-on at Fort Marshall. A mother to recent high school graduate Emmalin and wife to Major General Michael Holden, Claudia Joy has returned to law school to finish earning her degree.

Overall, Claudia Joy is a natural leader with a passion for justice (which can get her into trouble). In difficult situations, she knows how to find solutions to dealing with life on an active military post. Whether taking on the tribulations of struggling enlisted men’s wives or the problems of her own family, she always maintains a sense of grace, style and integrity. Claudia Joy and Michael are the godparents of Joan and Roland Burton's daughter, Sarah Elizabeth. 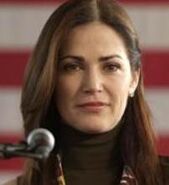 Add a photo to this gallery
Retrieved from "https://armywivesfans.fandom.com/wiki/Claudia_Joy_Holden?oldid=4043"
Community content is available under CC-BY-SA unless otherwise noted.